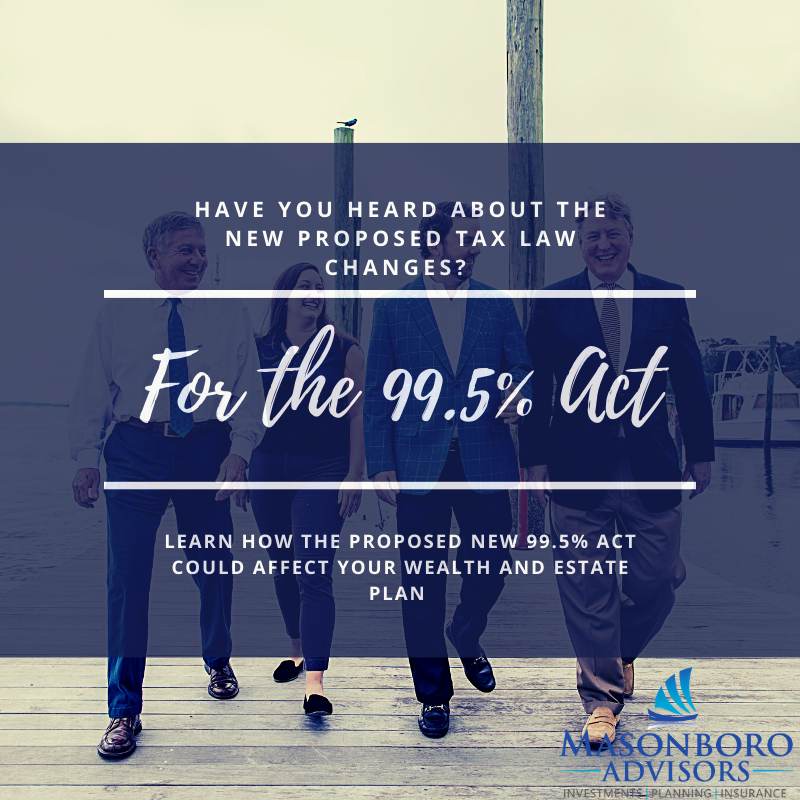 In late March Senate democrats, led by Bernie Sanders, introduced a bill that will dramatically change tax law regarding Estate planning and gifting. The “For the 99.5 Percent Act” is targeting tax law changes which will affect many common estate planning strategies used by the wealthiest segment (0.5%) of the population. If the proposed Act becomes law, many of these changes will be effective by the end of 2021 while also affecting some Estate strategies already in place.

Gift Tax Exclusion – Effective January 2022, the gift tax exclusion will be lowered from $11.7 million per individual to only $1 million. This drastic cut in the exclusion amount will make gift tax an important consideration in many individuals' Estate plans who may have not considered it previously.

Estate and Generation-skipping transfer (GST) Tax Exemptions – Similar to the changes in the Gift tax exclusions, Estate and GST tax limits will be decreased from $11.7 million to $3.5 million per person.

Tax Rates – Currently, The Estate and Gifting tax rate is fixed at 40%, the proposed changes in the bill would create a tiered tax rate schedule as shown below.

Valuation Discounts - The reduction, or in some cases elimination, of valuation discounts related to family-owned entities such as LLCs or Partnerships. Further, any non-business asset held by the entity would be excluded from any possible discounts and be treated as if it were passed down directly to the individual.

Grantor Retained Annuity Trusts (GRATs) – There will be stricter limits placed on GRATs. Under the proposed plan, they will be required to have a minimum term of 10 years; the current minimum is 2 years. GRATs will also be required to have a remainder interest when they are established. The minimum remainder interest will need to be the greater of either 25% of the assets value or $500,000. This ensures that a portion of the Trust’s assets will be subject to gift tax.

GST Trusts – Another new restriction in the bill will be a 50-year term limit on GST Trusts. These term limits will affect new Trusts as well as existing GST Trusts. For existing Trusts, the starting date for the 50-year limit will be the date the Trust was established. The assets in the Trust will be tax exempt during the 50-year period, but after that time expires, all distributions will be subject to the current GST tax rate.

Annual Gifting – Current tax law allows individuals to gift up to $15,000 annually to any, and as many, recipient(s) as they chose without being subject to gift tax. The proposed bill would significantly limit the opportunities to give tax free gifts. Donors will be restricted to $10,000 per recipient and may only gift a total of $20,000 annually.

Grantor Trusts, ILIT’s, and Crummey Provisions – Any assets in grantor trusts established after enactment will be included in the grantor’s estate, reduced by the value of any gifts. Consequently, this could mean that a portion of insurance proceeds will be included in the grantor’s estate if premium payments were made after the date of enactment. Also, regarding Crummey provisions, the Act would eliminate the effect of Crummey withdrawal rights when transferring funds to an ILIT. Instead, the Act simplifies things by providing a flat $30,000 cap for transfers to the trust regardless of Crummey provisions.